Urban Growth or Urbanization - What We Actually Need? 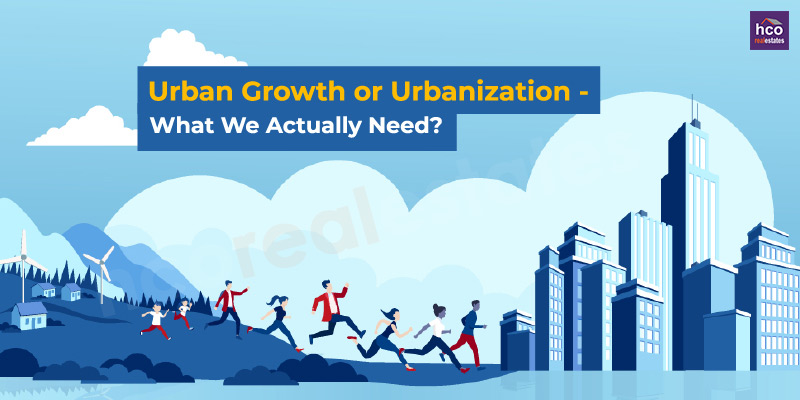 As our country boards on a new platform of swift development in the coming years on the way towards becoming a global leader, a relevant question appears in the mind - Urban Growth or Urbanization- What does the Indian need most in the future?

If we talk about urbanization, it is a phenomenon that tracks the rising percentage of the population of the nation living in urban regions. This is presented by a ratio/percentage of the total population of the nation. Simultaneously, urban growth is the rise in the population and dimensions of any region over a certain time expressed by way of a number. So, urban growth is the real increase in this number while urbanization is the proportional increase.

Urban growth generally signifies how the valuable surface is augmented by cities which could be the extension of city limits or land density that exists via greater densification.

On the other hand, urbanization is the formation of un-touched or rural land with the infrastructure development required for placement of city-based happenings within this region with commercial, residential, hospitality, recreational, and industrial activity. Urbanization works for utility infrastructure, IT services, roads, footpaths, wellbeing, and other municipal systems.

The Central Government defines an urban area as those with administrative bodies defined according to the statute. This also comprises administrative units that meet these conditions-

Urbanization in India has accelerated after the independence and according to the survey of the World Bank, the population in urban regions exceeded 30% based on the 2011 census, was pointing 31.16% figure. In 2017 the urbanization figure is 34% and if we rely on the UN State of the World Population report in the year 2007 then in 2030 approx. 40.76% population of India will be living in urban zones.

Mumbai (City of dreams) has observed a huge migration from rural districts to urban districts in 2018 and Delhi has 28 million migrators as of this time. Delhi has the most rapid global urbanization percentage with a population rising by 4.1% based on the 2011 census.

The figures of Housing and Urban Affairs specify that out of 1210.2 million people in the country as of March 2011, 377.1 million people reside in urban regions. The ratio is about 31.6% as far as the urban population is concerned. At this time 53 urban towns or cities in India as compared to 35 in the year 2001 and more needs to be completed on this count.

Taking all these figures & points into consideration, it makes sense to plan more about urbanization ahead of urban growth. It seems more logical to pace out urban development to give our metropolises some breathing space and enable proper placement of the physical infrastructure to the big population in place of focusing on committed growth pursuits without a justifiable plan.

Urbanization, alternatively, will make possible new developments for many regions while refining the quality of life for a larger section of people across the country. The advantages are multiple in this case. Urban regions get faster financing and involvement from the Central Government by way of infrastructure development and engagement of surrounding villages/regions into the urban infrastructure pool.

The planned development is then conceivable for settlements classified as urban zones and they come under all necessary building regulations, developmental guidelines, and taxation rules which are pre-requisites for better development. Development and production anyway go hand in hand more with urbanization and this is where we need to effort its energies. Urbanization lifts housing, infrastructure, and standard of living along with product markets in tandem with dropping logistical expenses. It will advance education, medical and social infrastructure too.

Urbanization in a strategic way can be accepted across peripheral regions of big cities accompanied by other semi-rural regions to boost the economy, infrastructure development, job opportunities, and real estate respectively. Urban development, on the other hand, can be phased out and speed up better in big urban agglomerations fighting to accommodate the rising number of people with low infrastructure developments.