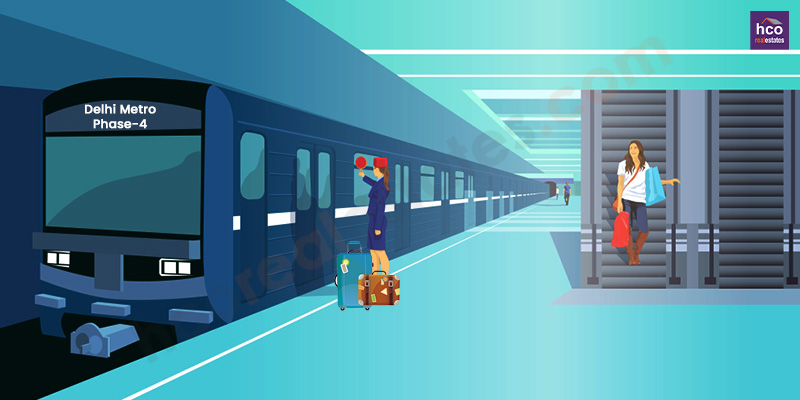 To heighten the connectivity graph in the National Capital of Delhi and its surrounding regions, numerous infrastructure developments have been planned and initiated in the last few years. Amongst all the planned projects, expansion of the Metro Corridor has taken to the front. With the approval of the 4th phase, the Delhi Metro will expand further to some of the important locales in Faridabad and West Delhi. Fact-wise, Delhi Metro by now has a massive network of about 389 Km with 285 stations (including NOIDA-Greater NOIDA Corridor and Rapid Metro, Gurugram). Started in 2004, the number of commuters in the metro has increased manifold, and it is now touching the 2.76 million mark daily (except covid}.

Phase 4 of Delhi Metro will add 103 KM, taking the total length to 492 km. The estimated completion year for the development is 2025.

The approved metro projects in Delhi would not only provide hassle-free travel but also catalyze the real estate growth of the city. The declaration is expected to lift not only the buying & selling of residential properties but also the rental landscape in the long term. A slight upward trend in the capital values is projected to post the construction work starts. The grip in the rental market on the back of excellent connectivity is expected only once the project gets finalized.

According to the real estate experts – the project is in its nascent stages, but the property market along the planned routes would be promoted. Rental properties may experience a direct improvement with ‘ask’ prices seeing a jump by at least by 5-10 % in the next few months, particularly in the prime established locations such as Janakpuri, Uttam Nagar, Vikaspuri, Pitampura, Prashant Vihar, and Paschim Vihar.

The approved corridors will be established at a cost of approx. Rs 25,000 crore. Out of which, 50 % will be bear by the State government. The Government of Delhi will raise the required funds of Rs 4,177 crore from State levies, land rents, and interest during construction. To accelerate the expansion of the metro corridors, the Delhi government, while presenting the Budget 2019-20, has approved a fund of Rs 500 crore for phase 4. The government had approved the Phase 4 project back in 2017. It should be noted that the Delhi government had primarily rejected 3 out of 6 proposed routes by terming them 'financially unviable. However, the Delhi Government later cleared the proposal without any alterations.

Experts opine that approval to the approved corridors, especially, Aerocity to Tughlakabad stretch would escalate housing demand and prices in the South Delhi region including Saket, Mehrauli, Ambedkar Nagar, and Khanpur.