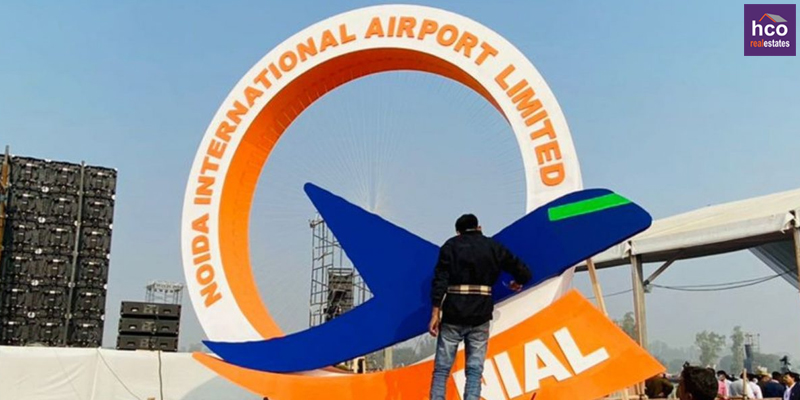 Jewar International Airport announced by the government was an important move that will drive significant future economic activity near the airport. From the time of the announcement to the completion of the project, the real estate market of Noida, Greater Noida, and Yamuna Expressway is expected to see a complete recovery and huge resurgence. It has already been a haven for the end-users and investors because of the liveable area.

With the impressive development of Jewar Airport, the area will get a boost with more real estate developments, whether it is residential, commercial, retail, or hospitality. The inauguration of the Jewar airport has been welcomed by local developers, attracting a lot of investment news.

It is a foundation stone lay at a site in Jewar in the Gautam Buddh Nagar district of Uttar Pradesh by Prime Minister Narendra Modi & is going to be a masterpiece turning into reality. When completed, this will be Asia's largest airport. The announcement day was one of the biggest days for the NCR region and Yamuna Expressway.

In his message, Manoj Gaur, CMD of Gaurs Group and Vice President of NORTH CREDAI, said, "This is a day of significance for the Yamuna Expressway and NCR regions. We are delighted with the Hon'ble PM Modi and Hon'ble CM Yogi Adityanath's foundation stone laying ceremony at Jewar. This is excellent news for the state of the region as well as the region as a whole.

It is expected that increased business activity will also lead to increased demand for residential as well as commercial properties. I am personally seeing a lot of future for real estate right now. We are nearly finished with a 250-acre township along the Yamuna Expressway," he said.

"Jewar airport will act as a pivotal factor in Noida and Greater Noida region's overall development in the coming days," said Ankita Sood, Head of Research, Housing.com, and Makaan.com & PropTiger.com. Its connectivity to these areas will strengthen sentiment across asset classes, which in turn will boost real estate sentiment. Despite the setback of the COVID-19 second wave, residential demand in the micro-markets around the new airport has already surpassed the 2020 levels as of September 2021.

In the words of Deepak Kapoor, Director, Gulshan Group, "Jewar Airport's launch has been a great development and will help Noida position itself globally. The seamless connectivity and high-end infrastructure developments like Film City are likely to attract a lot of investment from multiple industries, attracting new sections of corporate class including HNIs and UHNIs. In the midst of all this, real estate will be considered as one of the most promising alternatives. The airport looks forward to becoming fully operational once the government's support and rapid development are complete."

Sanjay Sharma, Director at the SKA Group, says, "Jewar Airport will be an important milestone in the development of infrastructure in Noida and Greater Noida. There will be an increase in new launches and sales activities in ongoing and upcoming projects in the nearby region because it continues to attract investors and end-users. Even RTMI can be an attractive proposition for people seeking homes near the airport in Noida as this region will be a hub of properties catering to various segments."

The opening of the Jewar Airport is expected to transform the Noida region, says Amit Modi, Director, ABA Corp. and President-elect of CREDAI Western UP. The city will be placed on the global logistics map. In terms of development opportunities, ease of doing business, etc., the state government has always been very supportive and proactive. Now that the airport is operational, the region will benefit from economic multipliers as well as create jobs in the construction business. It will also enhance corporate travel and leisure opportunities, and bring the Millennium City of Gurugram up to speed with Noida and Greater Noida."

Miglani, MD of Migsun Group, said that the real estate sector will be pivoting towards constant growth, and he looks forward to the changing skyline of New Delhi after the airport and Film City is completed. The demand for residential and commercial real estate will be undergoing a sea of change as a new class of corporate buyers and investors will be entering the market. With several companies showing interest in investing in the electronics sector in the region due to the upcoming international airport, an electronics hub near the Yamuna Expressway might become a reality."

According to Nikhil Anand, Director of Masters Infra, "the inauguration of an airport will affect the adjacent regions in terms of soaring business activities, employment opportunities, etc. Noida will also gain a competitive advantage over other NCR regions thanks to the developing infrastructure.".  This is an ideal time to make investments as the long-term returns will be substantial with Noida Airport and Noida Film City operating. Developers are also going the extra mile to offer novel products such as automated and controlled environments in commercial spaces."

What you need to know about Noida International Airport:-

As a result, the airport introduces a swing aircraft stand concept, which can be used by airlines for domestic flights as well as international flights without having to relocate the aircraft.